Christopher Dade enjoyed growing up in the small town of Rogersville, Mo., once dubbed the “raccoon capital of the world.” In Rogersville, there was a tangible sense of community and a comfort in knowing most everyone, but there was always something missing for Dade. He found that something when he arrived at MSA in 2012.

“It was nice to be around people who got me, and celebrated our nerdiness, and weirdness, and love of learning. It was like, oh, there are other people who think like me; there are tons of us out there.” 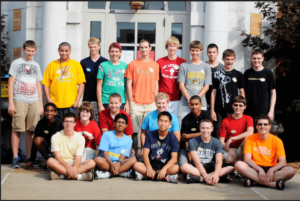 Dade said it felt new to be in such a supportive learning environment and to be encouraged to express curiosity for its own sake. He also found the academy to be the right environment to create lasting bonds with peers and mentors.

Dade didn’t always have enthusiasm for some of the activities during MSA, admitting that at first he “hated the idea of personal and social dynamics.” Expressing his thoughts and feelings to people he just met left Dade, admittedly shy, a sense of unease, but he ultimately found PSD to be one of the largest sources of personal growth at the academy.

Dade said Jen Meyer, his PSD leader, “was really good about showing that vulnerability, and pushing through discomfort to explore how people are in the real world….It played a role in asking me what kind of person I wanted to be and the kind of honesty I wanted from people around me.”

“You have very narrow views of what people are in high school,” Dade said.

“I returned with a new sense of the inklings of privilege I had in life,” he reflected. After the academy, Dade said, “I began to realize how things outside of school could really impact people’s ability to succeed.”

Dade said this transformative experience wasn’t limited to PSD, either. “The whole idea of the fourth week and bringing it home are super important to me,” Dade said, referencing the challenge scholars have to internalize the lessons and spirit of MSA beyond those three weeks in June.

“It’s about a way of life and asking questions which are impactful,” he said.

Dade found the Honors College at the University of Missouri to be a perfect fit for this expression. “We don’t tell people a lot, but MSA is set up to be like a mini honors college,” Dade explained. “It’s a very interdisciplinary approach to a liberal arts education.”

“At MSA, the way the program is set up, it encourages you to explore all of your interests and really ask yourself about the interconnectedness of things you’d never explored before. In high school, no one challenges you to find how your English and history material interact. But MSA actually exposed me to science policy classes.”

Dade said that although he’d been interested in chemistry before coming to MSA, the academy inspired a broader view of the disciplines. ‘How do science and politics, policy, and society interact to impact education?’ he thought, and for the first time, he was encouraged to find out.

“I was lucky enough to go, and I feel like every student deserves to have that opportunity to grow and be supported in their interests, and it gave me an appreciation of the humanity of my fellow students. It gave me a sense that the students around me had the ability to do great things, and I could believe in them even if their teachers and their parents didn’t.”

Dade really connected with his RA, Trey Sprick, during his time at the academy. Sprick encouraged Dade’s passions and close friendships between scholars by facilitating discussions on issues not typically broached to teenagers.

“He was into economics, which was unheard of in high school, so it was just someone I really respected for being an intellectual nerdy person who also lived a normal life,” Dade said. “I think RAs all had a good scholar experience, and they want to recreate an environment that allows scholars to have a good experience as well.”

Dade found the opportunity to come back to MSA as an RA in 2015 to be even more worthwhile, despite the sleep deprivation that comes with supervising 16 year-old-boys for 12 hours a day. 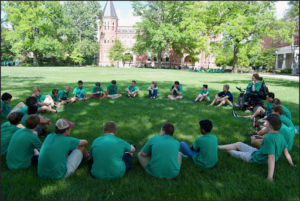 Chris’ House as an RA: The Crispy Kazoo Crew

“It was probably one of the most worthwhile things I’ve ever done,” he explained.

“You have so much growth over those three years between the academy and coming back. You realize your RA was your age, and you thought he had it all together, and he didn’t.”

Gaining a more holistic view of the academy, Dade was shocked at what a transformative environment it can be for its participants. “As an RA, it’s an additional benefit to watch scholars realize something about themselves because of how you facilitated PSD.”

Dade said being an RA also means supporting scholars’ vulnerable moments with compassion and understanding: “You work with students who are struggling with their depression, or their sexuality. And it’s always really hard to organize discussions around race, gender, etc. You have to approach it as a very delicate learning opportunity. There’s a lot of power in what you’re saying, and with vulnerable issues, you need to be vulnerable and sensitive. You learn a lot as an RA about yourself and about the world.”

If he could do something differently, Dade said, it would be staying in better contact with his peers from the academy. That doesn’t mean Dade didn’t make lasting friendships at MSA, however.

“I stayed in contact with my RA, and when I’m in DC we always meet up….The more people you get to know, the better your MSA experience is and the better chance you have of keeping week four going.” 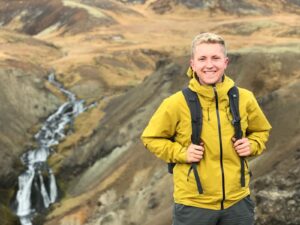 Making the most of the EU’s open borders in Iceland

Lately, Dade’s week four journey has included pursuing a master’s degree in science and health communication at Dublin City University. In fact, Dade is the first University of Missouri applicant–and one of only 12 American students last year–to receive the George J. Mitchell Scholarship to support a year of postgraduate study in Ireland.

It’s hard to tell where Dade may end up in the future. In his time at Mizzou, Dade played a mean trumpet, helped develop an informational app to improve voter participation, led a local March for Science, and testified multiple times to Missouri’s General Assembly on behalf of MSA and secondary education funding. Dade’s research experience ranges from protein crystallography at his alma mater to secondary metabolite profiling St. John’s Wort flower for the Leibniz Institute of Plant Biochemistry in Halle (Saale), Germany.

His future plans continue to reflect his love of chemistry, which was first nurtured at MSA in his major class on science and public policy. Dade may soon attend the University of Madison, Wisconsin, where he hopes to complete a doctorate in chemical biology.