By Xander Negozio and Caroline Dade

After spending three weeks of summer 2014 in Columbia, Mo., for the Missouri Scholars Academy, Riley Messer said her plan for college was set.

“I loved Mark Twain, I loved the campus, I loved the vibe of Columbia, and I loved the intellectual community that MSA had that also translates to the [MU] Honors College,” she said. 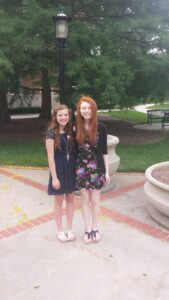 While at the Academy, Messer’s major class examined constitutional precedents for law, and her minor class was an introduction to philosophy. She was one of 327 rising high school juniors who attended the 2014 Academy, and she said her classes there have played a large role in her current course of study.

“John Meyer walked us through the analysis of previous cases and facts and applied them to new cases,” which Messer said sealed her interest in law. Through the aid of her instructor, and additional email correspondence after the academy, Messer realized she could best realize her passion for law through a political science degree. Messer’s instructor even helped reassure her not to get ahead of herself when she started worrying about law school applications as a high school senior.

Messer said her MSA experience was also relevant to her day-to-day life because it gave her the first glimpse of what college would be like. At the academy, scholars are tasked with independently personalizing their schedules and attending lectures on a diverse range of topics of their choosing.

“MSA helps teach students to accept intellectual curiosity as something that should be celebrated rather than hidden,” she said. “It allows for you to explore scholastic subjects that they may not necessarily touch on in high schools. You really get the opportunity to look into anything that you’re interested in and not worry about the stress of getting good grades.”

However, Messer said her biggest takeaways from her Academy experience have been in the relationships she formed. She said the group chat from her major class is still active almost every day. Although geographically divided, and largely in different career tracks, they manage to stay in touch and check up on each other on birthdays, holidays, and breaks. Her friends from the academy have been involved in Engineering, Journalism, and, “lots of great things at Mizzou and beyond.” 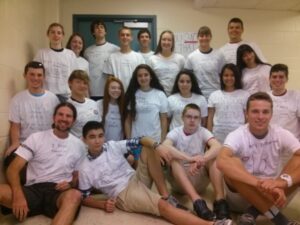 John Meyer’s Major Class: “You Can’t Do That: Laws, Rights , Prohibitions, and Consequences”

Since coming to MU, Messer has fully embraced the opportunities offered through the Honors College. During her first two years as an undergraduate, she conducted Discovery Fellows research on the perception and interpretation of political corruption before and after the Enron scandal. In the summer of 2017, as a Cherng Summer Scholar, she researched the qualitative changes in literature on corruption between 1986 and 2017. Last year, she helped choose the Honors One Read book: Loung Ung’s First They Killed My Father.

The One Read program focuses the entire Honors College community on one book – fiction or non-fiction – that becomes the focal point of programming, community activities and academic courses.

“My favorite aspect of the Honors College is the One Read program,” Messer said. “I absolutely adore it. My first impression of coming to college was going to the One Read symposium and discussing subjects that I loved.” 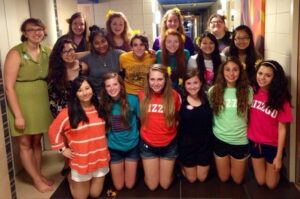 The seventh floor crew: “The 16 Wonders of the World”

The One Read Riley Messer participated in her freshman year was for Bryan Stevenson’s autobiography Just Mercy. Detailing racially and financially fueled inequality, Stevenson explains the disparity in criminal justice procedures which leads innocent poor men and women to be prosecuted more harshly than the guilty rich. Messer said the book provided new perspectives to students and prompted interesting discussions. This atmosphere was similar to that of MSA, Messer said, where the teachers and staff worked to create an environment where learning was celebrated without the typical pressures of school.

Messer is on the committee to choose the 2019 Honors One Read, and she is pushing for Rebecca Makkai’s The Great Believers, which chronicles the devastation of the AIDS epidemic in the 1980s and was shortlisted for the National Book Award.

“I ugly cried for the last quarter of the book; it’s amazing. Whether or not you do the One Read, you should read it.”

Overall, Messer is grateful for the support, direction and encouragement she found at MSA, all of which led her to MU and to the Honors College.

“MSA is just one big community,” she said. “If somebody has gone to MSA, you automatically feel like there is a sort of group that they’re now in. It’s a shared experience, and it doesn’t go away. If you see someone from MSA, it’s automatically a reunion.”