Stephanie Hasty, a ‘92 MSA scholar, had been teaching for 20 years when she decided to apply to the Missouri Scholars Academy again, this time as an instructor. Hasty wanted to teach a course about Race, Place and Identity in Missouri, a comprehensive look at “who we are, and how we got there,” for scholars.

Hasty had the idea after a teaching workshop on “Race, Place, and Diversity,” which she then applied to her teaching at Lebanon High School.

“Even as a person of color, of mixed heritage, living in southern Missouri, there were a lot of things they were talking about that I didn’t know,” Hasty said of the workshop. “[It was about] figuring out your identity, figuring out how race plays into your life, and having the power to be you, and I thought, ‘I want to do this forever.’”

Because of the emotional pressures endured by those adolescents in the LGBTQ community, and the challenges they face, especially in Missouri, Hasty said she wanted to explicitly do something in her classroom which was inclusive toward their community as well. She decided her own class discussions would encompass the intersection of race with gender identity and sexual orientation. “I don’t think they’re asked often enough, ‘who are you?’ They’re told who they are all the time,” Hasty said. “I don’t think we mean to, but we definitely keep them in the lane we’ve created for them; my goal is to have students identify themselves.”

Hasty had a student who transitioned gender identities between her classes, their freshman and junior years, and recalled other coworkers questioning the validity of their transition, believing that it was “just a phase.”

But Hasty said, “It’s not about if it’s a phase [for the student]. It’s about respect. The students need to know we have their backs. All you have to do is be nice.”

Hasty decided to use her platform teaching honors English (to 10th grade students) and AP literature (to 12th grade students) to facilitate class discussions about ethnicity, sexuality, and identity in their community. “The discussion has to be student led, where they are comfortable,” she said. “You can give them guidelines, and stuff to read, but they lead the discussions. I said, ‘If you don’t want to talk about your sexuality, don’t.’ So we had a whole day where we talked about those kinds of things: what we identify as and why we identify as it. Kids are thirsty to be listened to, they’re thirsty to learn, and it’s just a matter of getting out of their way, because adults, we’re often the ones who bring our own biases, and stop their conversations.”

Hasty said bringing the Race, Place and Identity course to the academy was even more of a delight than she could have expected. “Scholars academy kids know that things are never black and white, or this is right, this is wrong,” she said.

“We have a lot of students across rural Missouri and they know they should be informed, they want to be informed, they just don’t have the language,” she said. “It’s super important to let them define words in their own language, in their own way, and then use those definitions to further the conversation, like instead of using the word privilege, talking about what that means.”

“You have to remember it’s about keeping them comfortable, because, while they’re willing, you’re still taking 25 strangers, and asking them to share their life stories and get into it, which I think is hard.”

Grace Hu, a rising senior at Ladue Horton Watkins academy, and a 2019 MSA scholar, said participating in Hasty’s class allowed her to be more comfortable in her own skin.

“I was able to explore the implications of how my parents giving me a name with no ties to my culture affected how I perceived myself and how others perceived me.” Hu said.

“While my school is diverse for Missouri standards, I still find myself participating in a number of activities and classes that are majority white spaces. However, instead of feeling uncomfortable and wanting to assimilate, I am comfortable in my own skin and refuse to compromise who I am for anyone else,” she said.

“The discussion made me realize how I was hiding many parts of my identity in order to blend in to the predominantly white, upper class community of my school that I simply did not belong to.” Hu said, “I dress in clothing that I’m comfortable in, educate myself and speak out on topics that affect my community, build relationships with people who genuinely care for me rather than people who are overly focused on ‘social status’ and overall live life for me rather than for a version of me that is palatable for others.”

Another 2019 scholar of Hasty’s course was Ashlie German, a rising senior at Central High School in Springfield. German said that she was surprised by the similarity of the shared experiences among her classmates of color from across the state.

“I had never had such in-depth conversations about the challenges we face everyday, many of which we’re unaware of. Many of our experiences with racism were very similar, even though we were all from different parts of the state,” German said. “We all understood the systematic and cultural racial barriers that we have to overcome.”

German said that while growing up in a predominantly white household and culture, she had never engaged in conversations about race and identity in the way she was able to at the academy.

“I realized that I’d been suppressing a lot of my Chinese culture because I was uncomfortable with it, due to the racism I endured growing up,” she said. “Personally, I was bullied because I am Asian all throughout elementary and middle school. People made fun of my eyes, my height, and other things totally out of my control. My good grades and hard work were also downgraded/downplayed by my peers and teachers because of the fact that I am Chinese, and ‘Chinese kids are naturally supposed to be smart.’ When you are constantly being belittled and hurt for being different, you do your best to make sure you don’t get hurt more. So you suppress your cultural differences in an attempt to eliminate why you are being bullied.”

German said the course helped her learn how to navigate her own identity and self expression, which had been an inner and outer battle. “When your society is constantly pressuring you to conform and fit in, it can be hard to embrace your differences. On the other hand, however, there is also pressure to embrace your culture, especially when you look different. People constantly ask you questions and expect you to know the answers,” she said, “Society pressures you in both directions, but you just have to find ways to celebrate your culture and background in ways that make you comfortable.”

“This class helped me find confidence in my background again and I no longer try to suppress my culture,” German said, reflecting on the experience. “Ms. Stephanie and my classmates also inspired me to learn more about my heritage, so now I have learned much more about my country of birth and culture.”

In May 2020, the George Floyd protests spread across the country, encapsulating public outcry which had simmered since the killings of Ahmaud Arbery and Breonna Taylor in the spring. Systemic racism, institutional accountability, and the failures of the justice system were re-centered in the public spotlight alongside the uncontained and worsening coronavirus pandemic, which nearly brought MSA to a halt. This summer, Hasty had to adapt her course into a web-broadcasted lecture and discord thread following the talk. 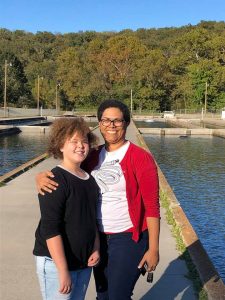 Stephanie and her daughter Lila

She said, “The way things worked out, we didn’t get to talk about JK Rowling and Transgender issues as much as I would have liked to, because they wanted to talk about Race and how to be informed so much.” Hasty did say that the virtual academy had its own unique benefits, however.

“This year, because we were virtual, we still get to do our Discord,” she said. “By the way, when you’re 44 years old and you’re talking to kids through Discord, you feel very cool. So they were able to keep the conversation going even after the academy was over.”

“With scholars [as compared to public school students], what’s great is you don’t have to convince them to communicate, or stretch their thinking; you just have to step back and listen,” Hasty said on bringing her discussions to the academy. “They’re articulate, they’re ready to share their opinions, ready to listen to other people’s opinions, and to learn from those kinds of things: it’s just really cool.”

“Even after 22 years of teaching, working at the academy gave me some confidence that I forgot that I had. I thought to myself, ‘Oh yeah, kids do wanna know [whatever it is], they don’t mind [this or that method of instruction], stop being afraid to try new things: push the envelope.’”